George Orwell,Greg Wise,Dione Venables,Audible Studios Oct 19, 2021 George Orwell,Greg Wise,Dione Venables,Audible Studios
This anthology has been in the making for some years in the mind of the editor, Dione Venables, founding member of The Orwell Society. In 2006 she contributed the postscript to her cousin Jacintha Buddicom's memoir about the childhood and early youth of George Orwell. She continues to work for greater clarity and appreciation of the great man's genius and felt that this emotional layer of perception had been largely ignored by academia. Her commentary on Orwell's life is intended to make his poetry more understandable to listeners from other countries. 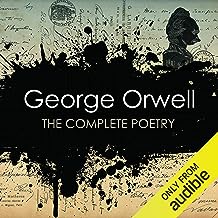